The flute dates back to ancient times, in fact, the first flute sounds probably came from nature, as the wind blew across the reeds growing along the shoreline, well before human ears were even around to hear their music. Eventually, humans most likely tried to imitate these early flute sounds with the reeds, but with their own air. Early flutes were played vertically, but gradually evolved into transverse or horizontal instruments by the end of the 13th century. Initially, flutes were made of wood and had no keys. Over the centuries, flutes have been made of many materials, including reeds, wood, plastic, glass, ivory, silver, gold, and platinum. Today’s modern flute continues to evolve with ever expanding technological advances. 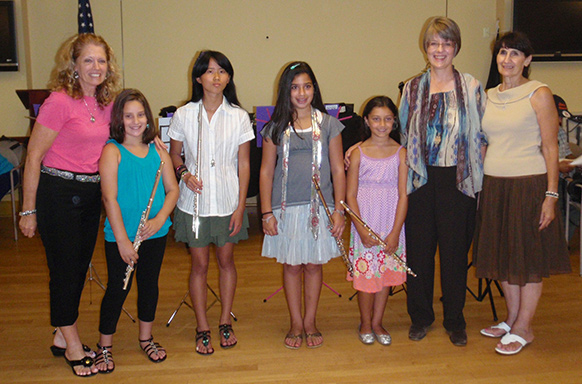 Flute lessons are 45 minutes in length and given on a weekly basis, throughout the year.

Additional lesson preparations can include: 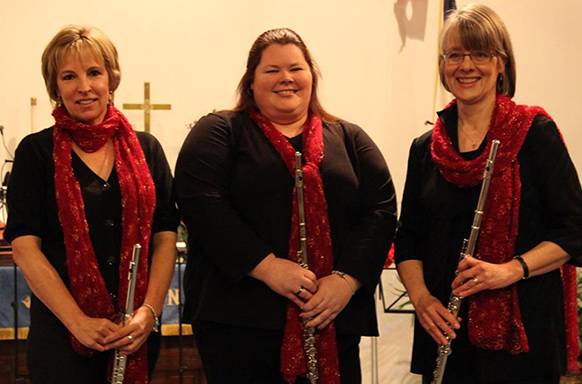 The Oyster Bay Flute Choir rehearses regularly and consists of adult flutists who have come together from various backgrounds and experience, but all share a love of playing flute. Some members have played flute since childhood, others started flute in adulthood, while others learned to play flute in their youth and then returned to it again as an adult. Do you love playing flute? There is a place for anyone interested in returning to their flute playing or continuing to enjoy playing flute music together in a flute choir setting. New members are welcome to join in the fun!

This program consists of weekly rehearsals throughout the summer, culminating in an August performance for the local seniors, at The Life Enrichment Center in Oyster Bay. This is a wonderful way for students to be challenged and grow in their playing throughout the summer. Students often return to school in the fall, surprising their teachers and classmates with their progress!

The ensemble performs a Christmas concert each December for the benefit of local charities. Ensemble concerts are always performed for the benefit of others in our local community. Kathryn believes this is an important lesson to share with her students: how they can each make a difference in someone else’s life by sharing their musical gifts with others.

For more information on flute lessons, rates and availability, or the Flute Magic! Ensembles, contact Kathryn.