About the Concert Zither

The term ‘zither’ is used to describe a wide variety of instruments from all over the world. The more specific term “concert zither” is used for the instrument which evolved from folk instruments in Germany and Austria in the early 19th century. The early zither instrument was truly a folk music instrument (“volkszither”), played around many a kitchen or living room table. This early instrument could only be played in a few key signatures, which worked well for folk music, but was a limitation preventing the zither from becoming a concert instrument at the professional level.

In the mid-1800’s, instrument maker, Max Amberger, in Munich, Germany, refined the zither instrument and string configuration. He is credited with making the first modern zither into a fully chromatic instrument which can be played in all 15 key signatures. The folk zither had now evolved into a full concert instrument.

The awarding winning 1949 movie, “The Third Man”, starring Orson Welles, featured an all-zither movie soundtrack by Viennese zitherist, Anton Karas, which helped inspire a renewed interest in the zither. Many of today’s zither players are dedicated to seeing the instrument continue to be played and enjoyed by future generations. At this time, there are approximately 200 zither players in the United States.

The concert zither has 5 melody strings covering the fret board, similar to a guitar, and these notes are fingered with the left hand, and simultaneously plucked with the player’s right thumb, wearing a zither thumb ring. There are also up to 37 accompaniment strings, similar to a harp, which are plucked with the right hand. Zither music is written in the bass and treble clefs, similar to piano music; however with the zither, the upper treble clef is played by the left hand on the zither, and the lower bass clef notes are played by the right hand. This is opposite of the way a pianist’s hands play music for the piano.

The concert zither has up to 187 basic tones. This gives it a greater note range than the piano (88 notes), the concert harp (47 strings with pedals, allowing for a total of 83 notes), and the 22-fret, six-string guitar (132 notes).

As you may imagine, with all these strings, the zither is indeed a challenging instrument, but also very rewarding for those who take the time to learn this beautiful instrument.

Zither lessons are 45 minutes in length, and offered year round. Each lesson is designed for the zither beginner and includes: 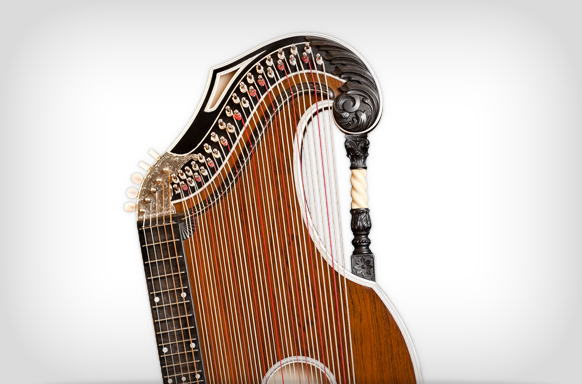 Finding a playable zither can be a challenge! Knowing about these challenges first hand, Kathryn has rental zithers available, which have been restored and strung with new zither strings, to make it easy for anyone interested in learning the zither to get a good start, right away! Once a student decides to continue with the zither, they can take the time needed to find, restore, and restring a zither, all the while having an excellent zither to play until theirs is ready.

An additional benefit for those who rent zithers, is a discount on zither lessons and the Long Island Zither Ensemble program.

The Long Island Zither Ensemble rehearses weekly and performs three times a year, in May, August, and December. Weekly rehearsals are held on Monday evenings at the Prinz Music Studio. Rehearsals include a 30 minute group zither lesson to grow together in zither skills and abilities, followed by the ensemble music rehearsal.