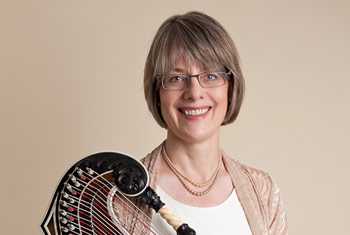 Kathryn’s philosophy to music and teaching focuses on the joy of learning and sharing music. She customizes flute and zither lessons to each individual, working to challenge each student to their potential, yet in a way which makes learning enjoyable, fun, and inspiring.

The love of music was a gift Kathryn learned from her parents. Her mother, Ruth Prinz, was a respected organist, pianist, and teacher, who also served as Kathryn’s mentor and role model. Her father, Harvey Prinz, played the hammered dulcimer, and performed extensively throughout the Midwest. Harvey built over 500 hammered dulcimers, for which he was known to have made some of the finest instruments of the time. Kathryn, along with her family, received the “Kansas Musical Family of the Year” award in 1980.

Kathryn maintains an active music studio in Oyster Bay, New York. She also teaches flute workshops and master classes at local schools, and has served as flute instructor for Friends Academy, Locust Valley, NY. Many of her flute students receive top honors in their school, NYSSMA, All-County, and All-State bands and orchestra’s.

The concert zither was first introduced to Kathryn by her family. Her father co-founded and played his hammered dulcimer with the Davenport Zither Ensemble (Iowa). Her sister, Anne, also became interested and started playing the zither. When Kathryn would visit her family, she would look forward to going to the zither ensemble rehearsals, thinking “if I lived here, I would also play zither!” Her interest continued, and she began her zither studies. She is primarily self-taught, but is grateful for the excellent zither instruction she has received from the following teachers:

While a relatively new zither player herself, Kathryn was still encouraged to teach the instrument, by others who also wanted to learn how to play the zither. Her extensive knowledge as a music educator and professional flutist has allowed her to offer a good musical foundation for new zitherists to begin playing.

Kathryn is also a New York State Licensed Massage Therapist (LMT) and Nationally Certified Reflexologist (NBCR).  This scope of knowledge has been an invaluable addition for students, as she can assist with the important body mechanics necessary to play these musical instruments.

Kathryn performs actively in numerous solo and chamber music settings throughout the Northeast, including: